Zürich to enshrine the circular economy in constitution 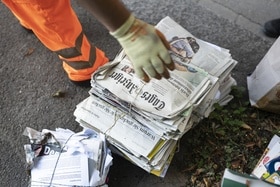 Voters in Switzerland’s biggest canton have overwhelmingly approved a new article to promote a cleaner and more efficient use of resources.

Just under 90% of Zürich citizens on Sunday said yes to the idea, which the cantonal government proposed as an alternative to an initiative by the young Green Party. All political parties were in favour of the idea.

The canton’s constitution will therefore be adapted to include an article calling on authorities to create frameworks for a “considerate treatment of resources, materials, and goods, as well as the closing of materials loops”.

Authorities hope the article will mean more attention is paid to the question of how raw materials are used, and re-used. It’s also assumed that gains in efficiency will help to reduce not only waste, but also energy use.

The Neue Zürcher Zeitung newspaper writes that each resident of Zürich produces an average of three tonnes of waste each year; two tonnes of this is then recycled. Most waste comes from the construction sector, the paper says.

Zürich is the first of the 26 Swiss cantons to include the circular economy in its constitution. Earlier this month, Bern’s cantonal parliament accepted a Green Party postulate calling for the setting up of more infrastructure and incentives to boost the circular economy.