What is the circular economy and why does it matter? 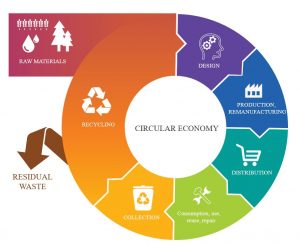 What is the circular economy?

In a circular economy, things are made and consumed in a way that minimizes our use of the world’s resources, cuts waste and reduces carbon emissions. Products are kept in use for as long as possible, through repairing, recycling and redesign – so they can be used again and again.

At the end of a product’s life, the materials used to make it are kept in the economy and reused wherever possible, the European Parliament explains.

Why is the circular economy important?

The circular economy is an alternative to traditional linear economies, where we take resources, make things, consume them and throw them away. This way of living uses up finite raw materials and produces vast quantities of waste.

For example, the European Union produces more than 2.5 billion tonnes of waste a year.

A circular economy could unlock $4.5 trillion of value by 2030, a report by Accenture estimated.

What changes could make the world more ‘circular’?

Consumers, businesses and politicians all need to make changes.

Examples are set out in The Circularity Gap Report, an annual document on the state of the circular economy, launched at the World Economic Forum’s Annual Meeting in Davos.

Ideas to create less emissions include adopting a plant-based diet and buying food locally, as well as flying less often and sharing vehicles.

Homes, offices and other buildings can be designed to have multiple uses. For example, an office space that is also a community centre and night school.

It should also be easy and affordable to repair products, such as a mobile phone with an old battery.

Is recycling part of the circular economy?

Recycling involves converting waste materials into new materials and objects. This process itself uses energy and creates emissions, so can still contribute to global warming.

In an ideal circular economy, products are redesigned so they last through several life cycles – rather than being immediately recycled.

This can include refurbishing and redistributing products.

How can we build a circular economy?

There are a growing number of circular economy initiatives and technologies already underway.

Examples include the Circulars Accelerator, a six-month programme run by UpLink, the World Economic Forum’s innovation crowdsourcing platform, to help circular economy innovators scale their ideas. In 2022, 17 start-ups are taking part in the programme.

They include Aquacycl, an American company that generates electricity from untreatable waste water; Done Properly, a company in Chile developing sustainable food ingredients and Green Mining, a company in Brazil that recycles consumer packaging.

Scale360° is another Forum circular economy initiative to help technologists, political leaders and entrepreneurs change how products are made and consumed. In Germany, for instance, a campaign is underway to educate consumers on the environmental impact of ‘white goods’ such as fridges and washing machines.

Other companies driving circular economy innovation include Swedish denim brand, Nudie. It offers a lifetime repair service on its jeans, and says it repaired more than 60,000 pairs of jeans in 2019.