Towards circular cities: A multistakeholder approach 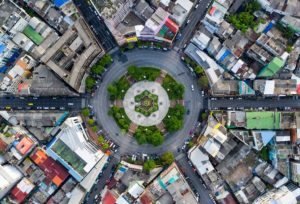 While cities grapple with burgeoning populations and meeting the basic demands of their citizens, providing environmentally safe ways to develop cities has remained a challenge. Increased and disproportionate resource consumption because of higher urban population densities has accentuated these problems in the Global South.

With growing urban pressures, cities now generate half of the global waste and 80 percent of greenhouse gas emissions, contributing to pollution, climate change and ecological degradation. To achieve SDGs, cities across the world have adopted a circular economy to reduce the environmental impacts of urban economic growth. However, how efficiently and often do circular urban systems account for the roles played by varied social actors in building smart, resilient cities?

Cities are central to the circular economy framework through the core practices of reduce, reuse, and recycle to minimise waste and pollution while keeping resources in the ‘loop’. Using nature as a template, the regenerative system of circular cities, from design to implementation, supported by policy innovations, infrastructure development, increased investments and capacity building, makes them different from linear urban models.

Cities are inhabited by people and communities who create shared experiences by living, working, and coming together in urban spaces. Cities are also recognised by their collective cultures, religions, lifestyles, histories, genders, and power structures. Efficient circular cities of the future will, therefore, have to address societal concerns and also how they can be more equitable and address the needs of even the lesser privileged in the planning process.

For instance, open green spaces are less accessible to the urban poor. Marginalised and informal groups continue to be employed in hazardous or menial jobs related to urban waste collection while facing social stigma and poor remuneration. Such concerns call for an attitudinal shift in gaining urban circularity. Other hindrances include socio-economic inequalities leading to inefficient urban solid waste management, failure of urban e-governance, the prevalence of gender divide and challenges to e-mobility. These burdens slow down the transition to circularity and lead to the futility of circular initiatives.

Urban circularity as a multi-stakeholder approach

Despite such problems, cities are yet to establish a comprehensive city-level assessment framework for steering circularity. However, few guidelines addressing the societal challenges of circular cities are reassuring. For example, the UN’s 2020 Guide to Circular Cities, with a four-step methodology, attempts to support multiple stakeholders in implementing circular actions while addressing the social concerns of development and providing alternate methods. Likewise, the European Green Deal promotes circular policymaking as a collaborative and co-creative practice suggesting the critical role of citizens and other actors in creating sustainable cities.

As the first successful urban model to transition to sustainable circularity, Amsterdam ensures people’s basic needs, such as food, water, housing, health, and social care, are provided. The city’s circular plan also ensured job growth, reducing unemployment, increasing productivity and offering a reasonable standard of living for all. On the other hand, Paris emphasises social (solidarity) innovation through the collaborative participation of its public-private-civil society actors in its circular model.

Among Indian cities, Surat has received a commendation for its circular economy model. The city has been able to consider the culture and spirit of its citizens in achieving its circularity. Mumbai’s Roti Bank initiative works with the city’s Dabbawala Association to mitigate its hunger problems. However, these efforts only call for more interventions applying social deliberation. India’s Smart Cities Mission, Make in India, Digital India, and Swachh Bharat Mission, have much potential for integrating socio-cultural contexts at the grassroots in the shift to circularity.

Moreover, it must be noted that some of the best circular city models have faced negative social consequences because they could not include social factors despite their efforts. For instance, though Stockholm has applied circular thinking to urban planning for several decades, it still lacks multiple perspectives. Social participation in bringing about changes in the social practices of Stockholm must be improved.

Likewise, Umeå’s local government, which had signed the European Circular Cities Declaration for developing a circular and socially responsible society, faced negligible engagement and a lack of awareness from its citizens and civil society. Such exclusion led to the need for thorough consultation and participation in transitioning to ensure environmental justice.

Putting people at the core of circular cities

The roadmap for global circularity depends on how well our urban geographies perform in the transition process. Developing countries may take longer identifying some of these opportunities and face implementation challenges. But the points of reference call for looking beyond the use and conservation of resources to re-imagining cities as vibrant socio-cultural systems of people and communities. Unless social impediments are addressed through evidence-based policy making, ensuring sustainable and accessible cities for all in the city will remain a power-laden, sluggish and cost-ineffective process.