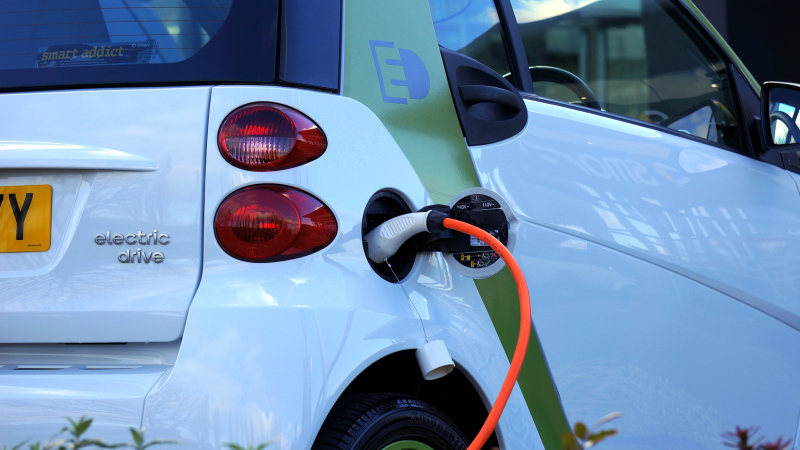 In 2021, 6.75 million electric cars were sold worldwide. This is more than double compared to 2020. The rise in electric cars has not been stopped even by higher prices for lithium batteries.

EV Volumes explains that the jump of 108 percent must be taken in the context of weaker sales in 2020, which was affected by the pandemic. However, even in 2020, sales increased compared to 2019. However, it was lower than originally expected.

More expensive batteries did not stop sales growth either. The price of batteries began to rise last year after decades of decline due to high demand for lithium that exceeded supply.

Only a temporary increase

The average price for lithium-ion battery cells this year rose to about 145 euros per kilowatt-hour from 96 euros in the first quarter of 2021. In 2010, it was more than 1,000 euros. The Russian invasion of Ukraine also contributed to the price shock in February this year.

“There is a fear that if Russia does not withdraw from Ukraine, the price shock may last longer and the fall in the price of lithium batteries will stop or slow down,” Patrik Križanský of the Slovak Electromobility Association (SEVA) told EURACTIV Slovakia.

He added that the increase in prices is not just about electric cars. As a result of the Russian invasion, the price of gasoline, oil and materials needed for the production of vehicles with internal combustion engines also rose.

“It is not right to talk about a specific price shock only for electric cars,” Križanský stated.

Although the shock is not limited to electric cars, more expensive batteries are already being passed on by manufacturers to the final price of vehicles. The Hongguang Mini, the best-selling electric car in China, has risen in price by almost 1,400 euros.

Andy Palmer, director of the Slovak InoBat battery plant, also admitted that the fact that higher battery prices will inevitably be reflected in higher electric vehicle prices. He told Reuters that “due to low battery margins, costs will have to be borne by manufacturers.”

The producers, in turn, admitted that they were redirecting price increases to customers. This applies to all types of vehicles.

According to EV Volumes, higher prices have not yet discouraged customers. Analysts explain this with a greater emphasis by consumers on environmentally friendly products. However, most experts assume that the increase in the price of batteries is only temporary. New investments in the extraction of important materials and the production of batteries should push prices down again in the coming years.

Rapid onset of electromobility in China

This means that for the first time, more electric cars have been sold in China than in Europe.

Sales also rose on other continents. North America recorded 735,000 electric vehicles sold. On other continents it was 286 thousand. However, several smaller markets, such as Brazil, Saudi Arabia and New Zealand, have seen electric car sales increase by more than 200 percent compared to 2020.

The share of electric cars in total sales of passenger cars, commercial vehicles and light trucks increased to 8.3 percent in 2021. In 2020, it was 4.2 percent. Among the regions, Europe had the highest numbers, up to 17 percent. It is followed by China with 13.3 percent and North America with 4.4 percent.

Figure 1: Sale of electric cars and their share in the sale of new vehicles 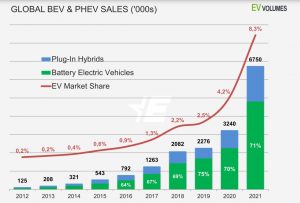